Muzaffarpur dairy is situated in north Bihar near Nepal border area. Irrigation and cattle farming are major occupation of people. Land is very fertile and half of the area remains flood affected most of the times, for this reason there is a huge loss of lives, crops and houses etc. Natural calamity is a main reason for people having poor means in this region.

Muzaffarpur dairy was established in 1982 with cooperation of organization of Bihar Government and United Kingdom 'Freedom From Hunger Campaign' with vision of providing market to milk producers and pure and fresh milk and milk products to consumer in city area.

At first a dairy processing plant with capacity of 25000 liters was in operation by Bihar State Milk Federation, which was handed over to Bihar State Milk Cooperative Federation in 1984. Forming societies at villages in whole country under the Operation Flood scheme, an operation has been initialized to provide market to milk producers in their own villages and to increase production and reduce expense. Especial emphasis given to artificial insemination, vaccination, distribution of insecticides, seeds of green fodder cultivation, urea treatment of straw, balanced diet etc.

Operation of cooperative societies is being run by farmers; like that Tirhut Dugdh Utpadak Sahkari Sangh is also being successfully run by representatives of milk producers. Where large number of cooperative organizations were failed or closed due to non profitability, milk cooperative societies and milk union are running profitably. Tirhut Dugdh Utpadak Sahkari Sangh was registered in 1989 and management of Muzaffarpur dairy was handed over to Tirhut Dugdh Sangh. TIMUL started achieving extensive growth when production of milk products started. TIMUL is a leading milk products producer in Bihar. Capacity of Muzaffarpur dairy was increased to 60,000 liters/day in 1995 and now it has capacity of 1 lac liters/day. 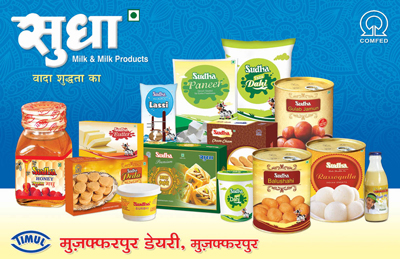